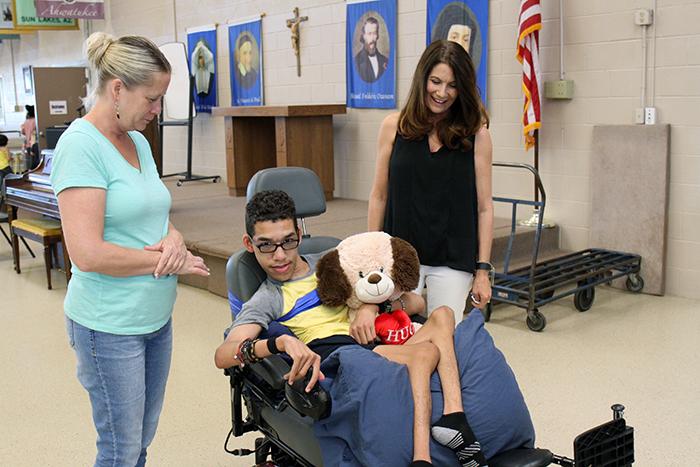 In The Driver’s Seat: Wheelchair Donation Brings Mobility to Teen

It’s a story that reminds us how one can never know the full impact of a simple decision, a small gesture and a generous gift. It’s a story that intertwines the paths of two strangers who will never meet face to face, but ultimately changes the life of one.

For Anna, this story began during her career of being an occupational therapist’s aide and ended many years after she had passed away. For David, it began when he was born 18 years ago.

David was born with a rare central nervous system disorder called Pelizaeus-Merzbacher (PMD). This condition severely limits his coordination, motor abilities and intellectual function. Diagnosed at age two, David has only ever known life in a wheelchair.

His mother Krissy shares that when David was born the doctor told her he would only live until he was 10 years old.

“But he’s my little fighter,” she says. “And I’ll do whatever I can to keep him alive, healthy and happy.”

Krissy says it hasn’t always been easy. During most of David's life she had a full-time job and at times, struggled to make ends meet. She says she is thankful for organizations like SVdP, which has helped her and David in the past. Outside of work, her focus has always been on David’s care, as he is unable to push himself in a wheelchair.

In September, Krissy and David were in Minnesota for a family wedding and a family member who owns a motorized wheelchair asked David if he had ever tried using one. After trying it out, Krissy couldn’t believe it. David had enough functionality of his arm and hand to control the chair himself. As thrilled as she and David were to discover this, she knew she wouldn’t be able to afford a motorized wheelchair, which can cost upwards of $5,000.

She shared her story on Facebook and a fellow church member took notice and referred Krissy to St. Vincent de Paul.

Waiting For the Opportune Moment

Stacy, a St. Vincent de Paul volunteer, heard about David’s situation and was thrilled to know that a recent donation she had made to SVdP would potentially find a good home.

“My grandmother Anna used to live with us and because of severe back injuries, she used a motorized wheelchair. She lived almost 90 years and when she passed away in 2008, we held on to the chair for years, knowing we would ultimately want to donate it to someone in need,” she says.

During her life, Anna had been an occupational therapist’s aide for 20 years and worked with disabled children, many like David. As fate would have it, Stacy had donated the wheelchair a few weeks before Krissy and David even contacted SVdP.

“She would be ecstatic to know that David got the chair. It’s almost like she intervened to make sure it was given at the right time and went to the right person.”

Driving For the First Time

David and Krissy recently visited St. Vincent de Paul to try out the motorized wheelchair and meet Stacy. David brought along his best friend, Christina, who has been by his side since he was five years old.

David slowly tested the chair with Christina cheering him on. Watching him ‘drive’ for the first time in 18 years, Krissy stood by, overjoyed.

“This is going to give him the independence that I’ve only dreamed he would ever have. I’ve always known that he’s wanted that independence and has at times, felt trapped in his chair. This gives him freedom. He can make the choice of where he goes now. And that is an incredible blessing. I’m thankful to Stacy and her family for this amazing gift.” 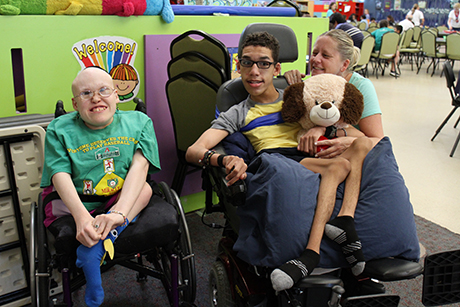 We want to give a special thanks to David at NuMotion Wheelchair Compnay – who donated parts, batteries and labor to get the chair ready for David.