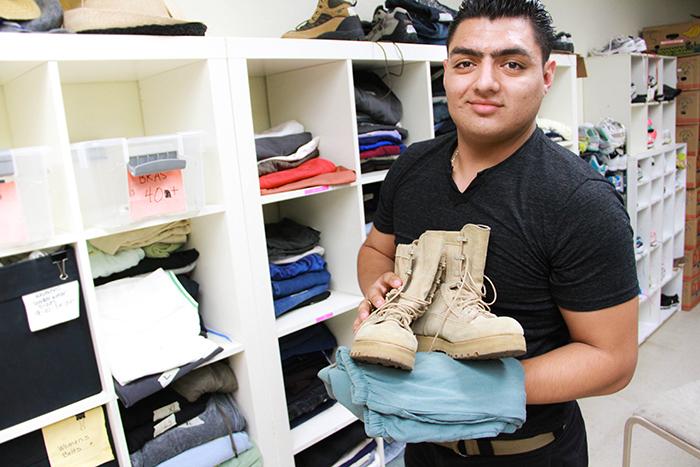 Teen's Outlook On Life Changes After Volunteering at SVdP
June 2022

As Esteban Chavez, Jr., walks through the main campus of St. Vincent de Paul, he is greeted by nearly everyone who passes by. He stops to chat with a few people, including staff, asking how their day is going.

It’s clear he is comfortable and well known at SVdP, but if you had asked him a year ago if he thought this would be case, he would have a very different answer for you.

In April of 2014, Esteban was charged in a criminal incident, which resulted in his spending two nights in jail and ongoing legal proceedings. When asked about that time in his life, Esteban thinks back and says, “I was a different person back then. I was materialistic and cared about what people thought of me.”

Spending two nights in jail and facing the possibility of more jail time got Esteban thinking.

“I felt like I just threw my whole life away. One second changed everything.”

But his biggest change was yet to come.

After the incident, Esteban began a long road of legal proceedings and currently wears a mandatory ankle bracelet until his final court judgment. At first he was only allowed to be at home or school. But his mother suggested he use his free time to volunteer at SVdP.

Over the summer, Esteban committed himself to learning the ins and outs of several programs. He came in every morning at 7 and worked until 9 p.m.

Proving to be a tremendous asset and help to each department, Esteban was quickly sought after because of his time commitment and willingness to learn every aspect of the job. He volunteered in the Dream Center, served food in the dining room, handled family intakes, translated in the ‘barbershop,’ worked in the food reclamation warehouse, volunteered for Hearts and Hands events and even took on security detail in the dining room.

“Esteban has become an exemplary volunteer. There is not enough of him to go around. He is in high demand!”

But even after several months of long volunteer hours, Esteban’s biggest eye-opening experience was still ahead.

“After going through all the departments, I felt like something had changed inside me, but not completely. I still didn’t feel grateful enough. But then I walked into Special Ministries. The first day I walked in, I wanted to cry.”

On that first day, Esteban looked around and saw what homelessness really looked like. Housed on our main campus, Special Ministries welcomes homeless guests and provides them with showers, clothing, shoes, counseling, and referral services. It was here that Esteban saw how much need there is for the homeless population in Phoenix, and he realized that he was still ungrateful for everything he had. But he also noticed something else.

The guests he helped had smiles on their faces. They were grateful for every item they were given.

“I realized that having a lot of material things in life isn’t everything. You don’t need a lot of nice things in order to be happy.”

After working in Special Ministries for three months, his entire outlook on life changed. He became more humble and more caring. He saw how little some people have and knew that despite his circumstances, he should always be grateful.

And this new attitude spilled into very aspect of Esteban’s life. After returning to school at Veritas Preparatory Academy for his senior year, several students criticized the school’s decision to let him return after the accident. Esteban admits that in the past these comments would have made him angry and defensive, maybe even lead to a fight.

But after spending so much time with those in need, he realized he didn’t need to impress anyone anymore. He realized there were more important things in life to worry about and so much he could be doing to help others.

Throughout his time here, Esteban grew close with SVdP Executive Director Steve Zabilski. Steve always encouraged him, gave him advice and after one minor incident, stood up for Esteban.

“Esteban is wise and mature far beyond his years, and has a gracefulness and gentleness that is frankly uncommon for people of any age, much less a young person,” says Steve. “We’re a better organization as a result of him being a part of St. Vincent de Paul.”

In fact, Steve has offered Esteban a job at SVdP on multiple occasions, but each time Esteban has refused.

“I don’t want to make any huge commitments right now because I’m still going through legal proceedings, but more than that, I’m here to help people. I’m here because I want to be here. It’s not about the money for me.” 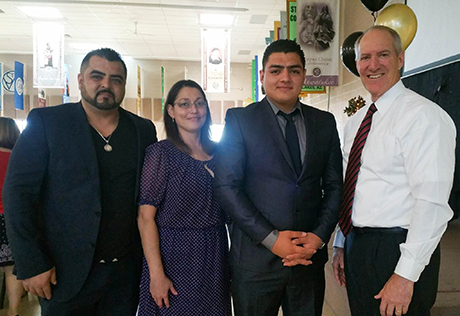 And it shows. In the year that Esteban has been at SVdP he has put in 1,400 volunteer hours and was recognized for his work during a recent Volunteer Appreciation Luncheon. While he waits for his final court judgment, Esteban continues to volunteer, studies fire sciences at Phoenix College to become a firefighter, and would also like to become a Vincentian at a local SVdP food pantry.

“Coming here changed me. It changed my life. I don’t know what’s going to happen in the future, so I will leave it all up to God and remember to always be grateful in the meantime.”