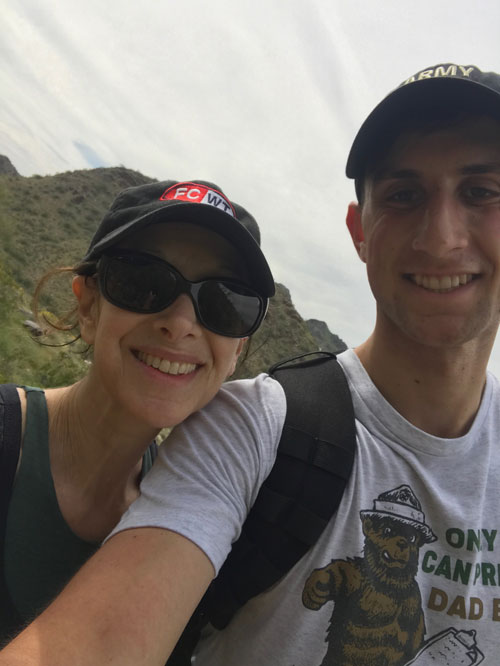 It was $700 that he could have put toward anything else, but Tom Katsenes wanted to help a family in need with the part of his stimulus check that he could spare.

That’s why the 21-year-old donated it to St. Vincent de Paul’s Family Relief Fund that offers support to those struggling to pay bills and put food on the table during the COVID-19 pandemic. His mother, Lori Mann, helped round it out to an even $1,000.

“I honestly didn’t need it,” said Tom, who attends the U.S. Military Academy at West Point.

Like many college students during this time, he wrapped up his sophomore year from his family’s home in Scottsdale, Arizona. As an Army cadet, he earns a small paycheck, has tuition paid for and files taxes independently from his parents. So Tom knew he would be getting a stimulus check, but he wasn’t sure exactly how he would spend it. That changed after he watched a local news report.

The news segment covered the effect the COVID-19 pandemic is having on Arizona families suddenly out of work and struggling to make ends meet. Tom watched the footage of people in long lines outside food pantries, enduring the heat and wait times so that they could bring home groceries to their families.

“Food—that’s the one thing I would want in this time,” Tom said. “My family and myself, we’re very fortunate we don’t have that worry that some people may have.”

When the news story finished, Tom felt he had to do something. He wanted to help his community. That’s when he realized an opportunity presented itself with his stimulus check. As he and his mom considered where their combined donation would make the most difference, they remembered their connections to SVdP and the work the nonprofit does to support families. The mother and son had a history of volunteering in the Family Dining Room in the past.

“I remember that was something I looked forward to doing,” said Tom, who also volunteered as part of Boys Team Charity at Chaparral High School, where he graduated in 2016. “Part of it was getting to hang out with friends, but it was also that I enjoyed giving back. You come out feeling fortunate and grateful for what you have.”

Tom’s currently studying American politics at West Point. After he graduates, he’ll serve on active duty for five years, maybe more. He’s not sure whether he’ll make a career out of the military. He comes from a family of men who have served in numerous local government roles and is considering following suit. Either way, his focus is outward.

“I naturally want to help people and do my part,” Tom said. “And given the nature of what I’ve signed up to do in the military, I really feel that helping is something that I not only should do but need to do.”

At 21, Tom showed immense empathy for others. You can do the same. Whether you spare some or all of your stimulus check, you have the opportunity to turn an unexpected added bonus into a lifeline for a family in need.