A Sweet Treat from the Salcidos

I scream, you scream, SVdP screams for ice cream! 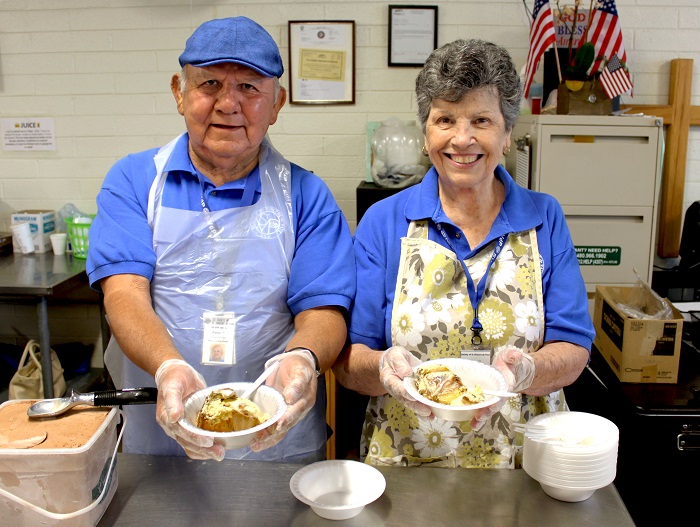 With a heavy thud Pete Salcido rests two large gallons of ice cream onto the metal table in front of him. Eyeing the twin containers carefully, Pete weighs the options.

“Let’s go with this one,” he says and peels off the container’s plastic lid exposing the minty green treat inside.

Pete drives the ice cream scooper into the plastic tub and smiles. He turns to the woman beside him and exclaims, “mint chocolate chip is always popular Ersie!” 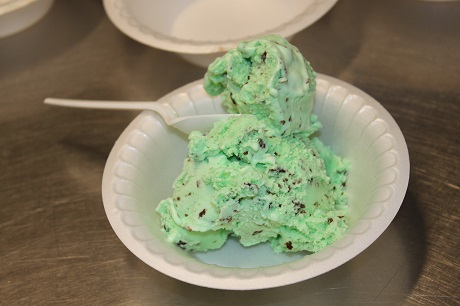 Ersie nods in agreement, smiles and places a Styrofoam bowl in front of her husband.

Pete and Ersie Salcido began their volunteer service with St. Vincent de Paul in 2006. For four years, the couple worked alongside members of the St. Stevens food pantry. While the work was important, Pete and Ersie were longing to spend more time with the people that they were helping.

At the recommendation of a friend, the couple signed up to serve lunch in the Mesa Dining Room.

“We loved it,” Ersie explained. “Volunteering in the dining room gives you such a great feeling! You get to be hands on and form relationships with the people that you serve.”

What began as an afternoon volunteering developed into a lasting relationship with the dining room they have fondly come to know as their second home.

“When we started volunteering eight years ago, Ersie and I would get there early with other volunteers and make hundreds of peanut butter sandwiches to give out,” Pete said.

Occasionally the volunteers would all pitch in money to buy bologna and chips to serve instead of the standard peanut butter.

“We wanted to give the guests some variety, so we would all chip in,” explained Pete. “The guests loved it! It was really well received.”

From there, that kindness evolved into something even sweeter.

“We wanted to give the guests a treat that they don’t usually get,” Ersie said, “that’s when we decided on ice cream.” 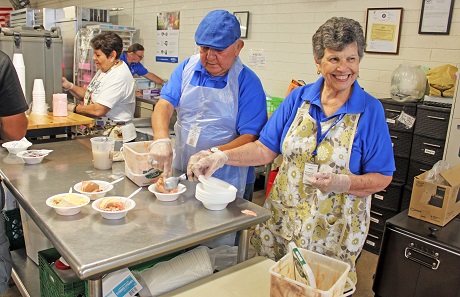 Each week the Mesa volunteers would buy ice cream to serve during their shifts.

“People were so thankful!” said Ersie. “I met one woman who said that this was her first bowl of ice cream in years. She was so appreciative.”

Instead, the volunteers developed a monthly tradition.

Every fourth Sunday, they purchase 17 gallons of ice cream for the Mesa Dining Room. The morning is spent serving up scoops of the frosty dessert. It’s an activity that keeps volunteers like the Salcido’s coming back for more.

Having volunteers that are as sweet as the treats they serve lifts the spirits of our guests each day.

Watching the couple work can’t help but make you smile. Pete fills the bowls with two giant scoops of ice cream just as fast as Ersie can lay the containers down.

Occasionally, he beats her to the punch—a scoop of ice cream in hand and not an empty bowl in sight; and that’s when you’ll hear it.

Then, like a flash, Ersie dishes out the Styrofoam container and gives her husband a smirk. 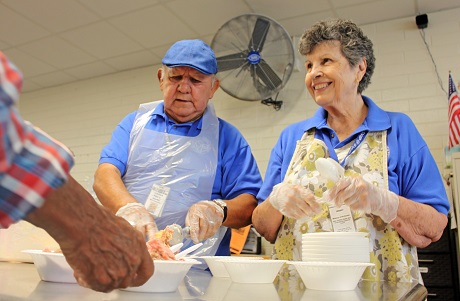 “I’ve got it, I’ve got it,” she says smiling as she hands a bowl of ice cream to a guest in need.

Volunteer opportunities like the Salcido’s are available every day at St. Vincent de Paul. For more information or to schedule a shift, email volunteer@svdpaz.org.