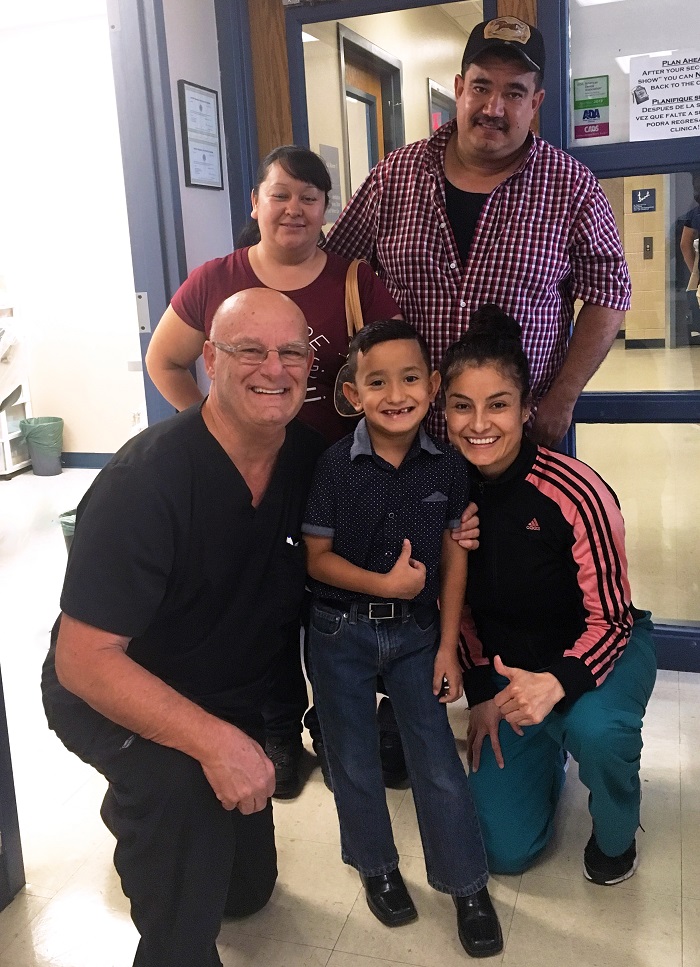 When you meet Alexander, he appears to be just like any other six-year-old boy. He is in first grade, loves toy trucks and has lots of energy. However, Alexander was born with a somewhat rare condition known as palatal fistula, which left a gaping hole where the roof of his mouth should have been.

This condition affects a small number of newborns every year, but is more commonly seen in children as a complication following cleft palate surgery.

His family didn’t know what to expect. “For us, it was sad when he was born with this condition,” said Edith Valenzuela, his mother. “From the beginning, it was very difficult for him to eat and drink. [Breastfeeding] would sometimes take a full hour.”

Fortunately, surgeries to repair fistulas are fairly straightforward and have a high rate of success. But Alexander was born in Chihuahua, Mexico, where medical specialists, including oral surgeons, are in short supply. Still, his parents were determined to do everything in their power to obtain the best medical care possible for their son.

When he was a year old, Alexander had his first surgery. Doctors attached a graft to his mouth in an attempt to cover the fistula. Two days later, the graft detached and fell out. A second surgery also failed, this time resulting in an infection and a high fever. Alexander spent 15 days in the hospital recovering.

After being referred to another doctor, it became clear that Alexander had been allergic to the type of sutures used in both surgeries. So he underwent a third operation, using a new type of stitches. This time the surgery was mostly successful – although a small, dime-sized hole remained. While this was significant progress, Alexander still had trouble eating soup or drinking milk, which would sometimes come up through his nose, resulting in chronic sinus infections.

“He remained that way until this past year,” Edith says. “It was still difficult and other kids didn’t want to play with him because of the way he spoke. His speech impediment meant they couldn’t understand what he was saying.”

Alexander’s family moved to Phoenix four years ago. Almost immediately, they began searching for clinics that might be willing treat Alexander and ease his suffering. But the scope of treatment was beyond the capacity of most clinics, which lacked the specialists needed to perform the surgery. Besides, costs for this procedure routinely run as high as $30,000. Alexander was running out of options.

Early last year, Alexander began working with a speech therapist who encouraged his parents to seek treatment for his palatal fistula because of the pronunciation problems he was having. Around that time, Edith heard about St. Vincent de Paul’s free health services, and reached out to the medical clinic. Following an initial appointment with SVdP’s Clinical Director Dr. Lee, Alexander was referred to Dr. Ken Snyder, SVdP’s Dental Clinic Director.

Dr. Snyder also relies on an extensive network of dental care providers who volunteer their services for free or at a steeply discounted rate. He recalls his early days at SVdP’s clinic, when the clinic’s founder, Dr. Earl Baker, told him: “We're the clinic of last resort. If we say no, they aren’t going to get help anywhere.” That statement hit home, and it drives him to find help for his patients any way he can.

Every couple of months, Dr. Snyder receives cases like Alexander’s that go beyond the normal scope of the clinic. But getting someone to donate operating room time for Alexander proved difficult. The anesthesiologist alone quoted a cost of $4,000, before Dr. Snyder explained the situation and negotiated the cost down to $100.

Finally, after months of searching and negotiating, an agreement was reached with Scottsdale North for Alexander’s long-awaited surgery. Dr. James Bertz, a Scottsdale-based oral surgeon, was instrumental in getting the operating fee waived and graciously offered to perform Alexander’s surgery himself, probono. The late-June procedure went smoothly and Alexander is healing according to plan. He will undergo one additional, less extensive procedure to finalize the surgery.

Now in first grade, Alexander will continue to meet with his speech therapist. But already, his parents notice a difference. “Now, after the surgery he can talk very well!”

Edith and her husband, Luís Flores, are quick to express their gratitude to Dr. Snyder and SVdP for all the help her son has received. “He [Dr. Snyder] has a big heart,” Luís says, “and those he referred us to were very good people. He always calls us to ask how Alexander is doing and he’s always looking for people who can help us.”

And they are eager to spread the word about SVdP’s dental clinic. “We talk to people we know and tell them about our experiences here,” Edith says. “We refer them so they can receive help too.”

Help Us Care for the Uninsured

We tend to important medical issues for those who cannot afford it with understanding and dignity. And because of the philosophy of our clinic, which is to not only to cure bad health, but to curate good health, your day of generosity will keep on giving for years to come.