Volunteering showed David Mintz the power of connection, something he'll continue as a doctor

On the road to medical school, David Mintz described his volunteer experience at St. Vincent de Paul as a gratifying calling he considered to be “the most important thing I’m doing right now.” Since his introduction to SVdP in high school at Brophy College Preparatory (he and his friends volunteered together to fulfill community hours) and again as a student at Arizona State University, the call to volunteer kept getting stronger.

For David, serving in the Family Dining Room began as one night a week, then grew to two nights and before he knew it, he was helping as a lead, “running the show.” That was pre-pandemic, although SVdP has since reopened some of its dining rooms to a hybrid dining model, offering socially distanced dine-in meals alongside to-go service.

From dinner service prep and setting up tables, to taking orders, plating and delivering food to guests, cleaning up and orienting new volunteers, David recalls, “It was so awesome and kind of scary at the same time. It was my responsibility to make sure everything went smoothly and organize new volunteers.”

He got over the jitters by telling himself, “We’re all here to feed people, to get food on tables and to make people happy.”

All the while, David was wrapping up his fifth year of studies at ASU, completing his second bachelor of science degree in applied mathematics before graduating in May 2021. (His first bachelor's degree is in biology.) That same year, David applied to more than 40 medical schools across the country while also working full time as a physician scribe in the emergency department at a local hospital.

Volunteering, of course, looked great on applications, but it meant so much more to David than a line on a resume. That's because volunteering gave David a place to be connected to his community. It also brought about a new friendship. 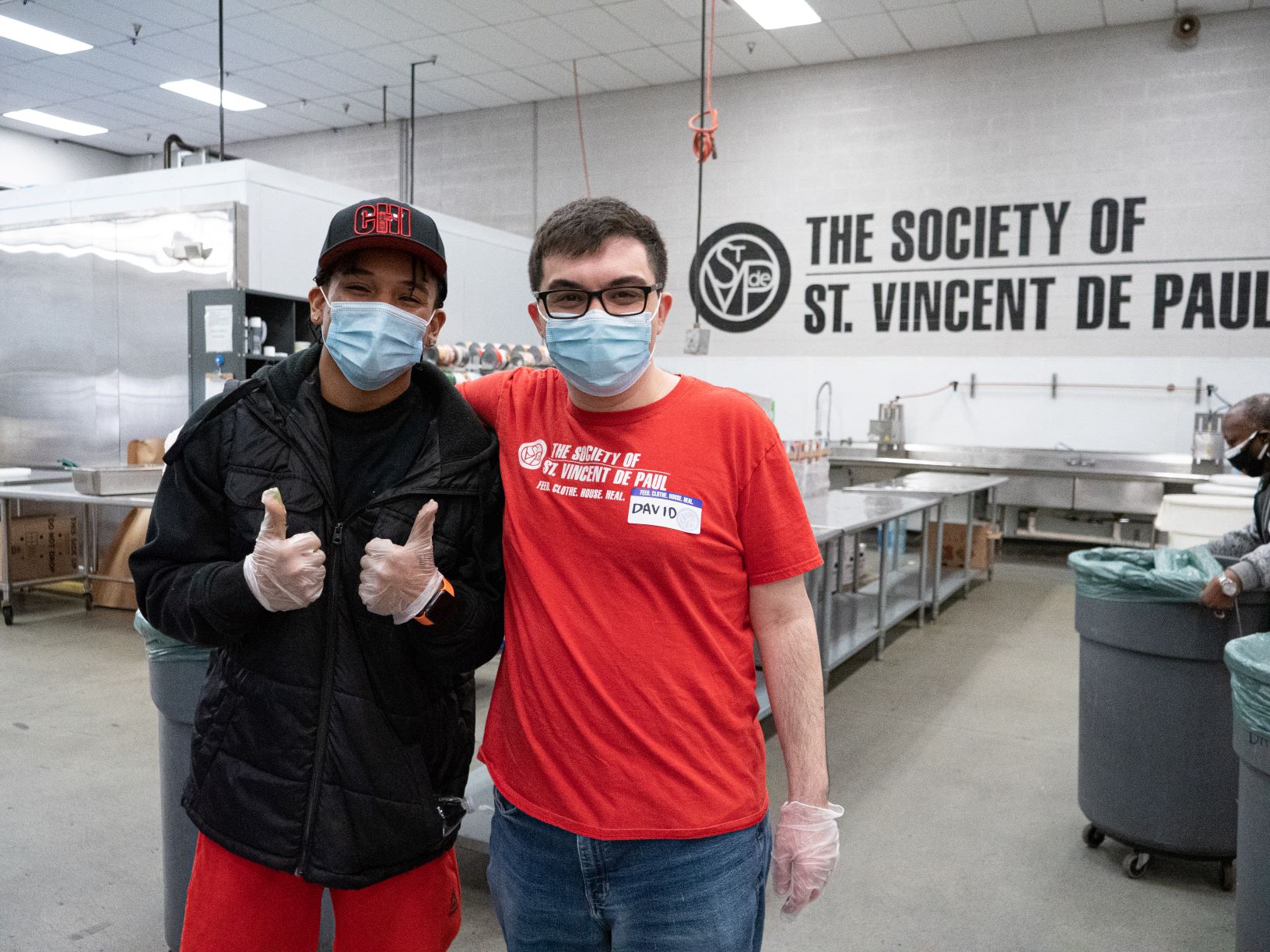 David formed a special bond with Sisqo, a kitchen staffer who helps with dishes. It just so happened that staffing the dish window was David’s favorite role.

“It was a fun vibe in the kitchen, as music was always playing,” David said.

One evening when the volunteers were chatting with young guests and asking them math questions in exchange for extra cookies, the lead chef mentioned that Sisqo needed help with his math homework. Another volunteer quickly chimed in, “David’s a math major!”

Sisqo, a college freshman, happened to have his laptop in the dining room that night. After the guests had their hot meals and the dishes had been cleared away, the volunteers gathered for their meal together, and David and Sisqo worked on algebra homework. David had experience as a math tutor, typically hired by parents to help their struggling students — most of whom aren’t always motivated to learn it, he admits.

David recognized early on that Sisqo took a genuine interest in wanting to learn. “Algebraic equations…this was cool stuff!”

The tutoring continued to take place in the dining room after meals. Other times, David would come to the dining room to help Sisqo after a weekend shift and work on math at Sisqo’s house. “In-between our math work, we talked about life, philosophy, our futures,” remembered David. “Sisqo is a friend to this day.”

Bonus: With David’s help, Sisqo improved his grade by 20 percent and passed his class. “I was very proud of him,” David said. “He’s my most successful tutoring experience.”

Sisqo offered to pay David, take him out to dinner for his time and teaching. “There was no reason for that in my eyes,” David said. “I was glad to help him and not only had fun, I made a friend. Sisqo had an intrinsic desire to learn and worked hard, which is why it worked out so well.” 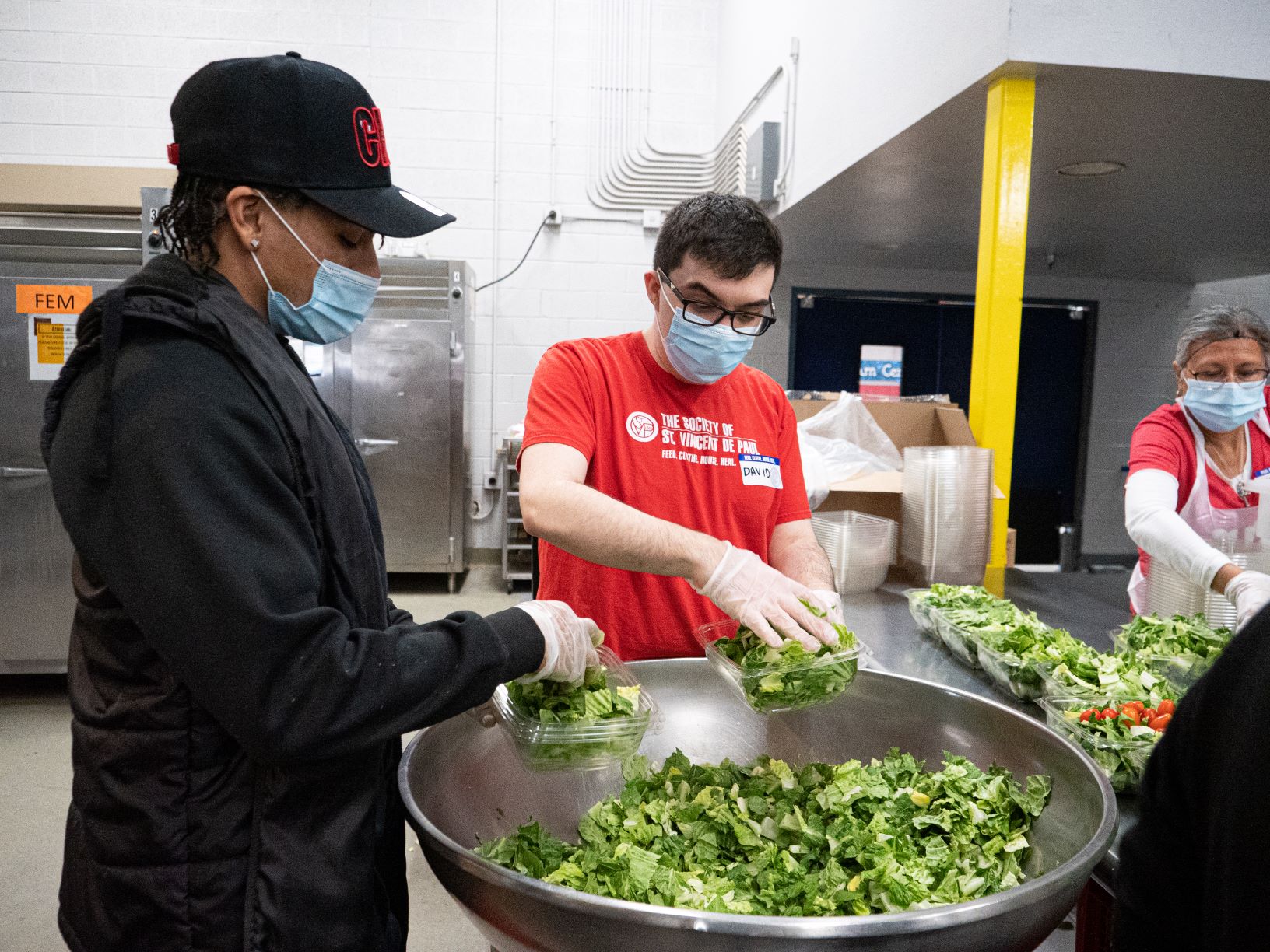 Making a direct impact while serving others is what motivated David to volunteer at SVdP and inspired him to become a doctor. He's since been accepted into medical school at the University of Arizona.

“St. Vincent de Paul does a really good job, giving volunteers opportunities that with the snap of a finger, you can make a direct impact, fulfilling the needs of people in your community, he said. “I appreciate that they make it easy for people to do that—it’s a good way for us to come together and do good things. Volunteers are like a close-knit family and [they're] very welcoming to new volunteers. The family meal model is made for anyone who walks in the door to help and be of use.

“I look forward to the same gratifying experience someday when I’m a doctor,” he continued, “as serving others is exactly what I’ll be doing. Patients’ needs come before yours.”

David looks forward to serving again at SVdP in one of the dining rooms or wherever volunteers are needed in the new environment whenever he's back in town.

“I’m going to go wherever they need me.”

St. Vincent de Paul is welcoming back volunteers now. David Mintz shared his volunteer story in the hopes that others would return and join in helping make a meaningful impact in their community. Find out how you can serve through these summer opportunities and sign up at stvincentdepaul.net/get-involved.