Finding love in the land of Oz 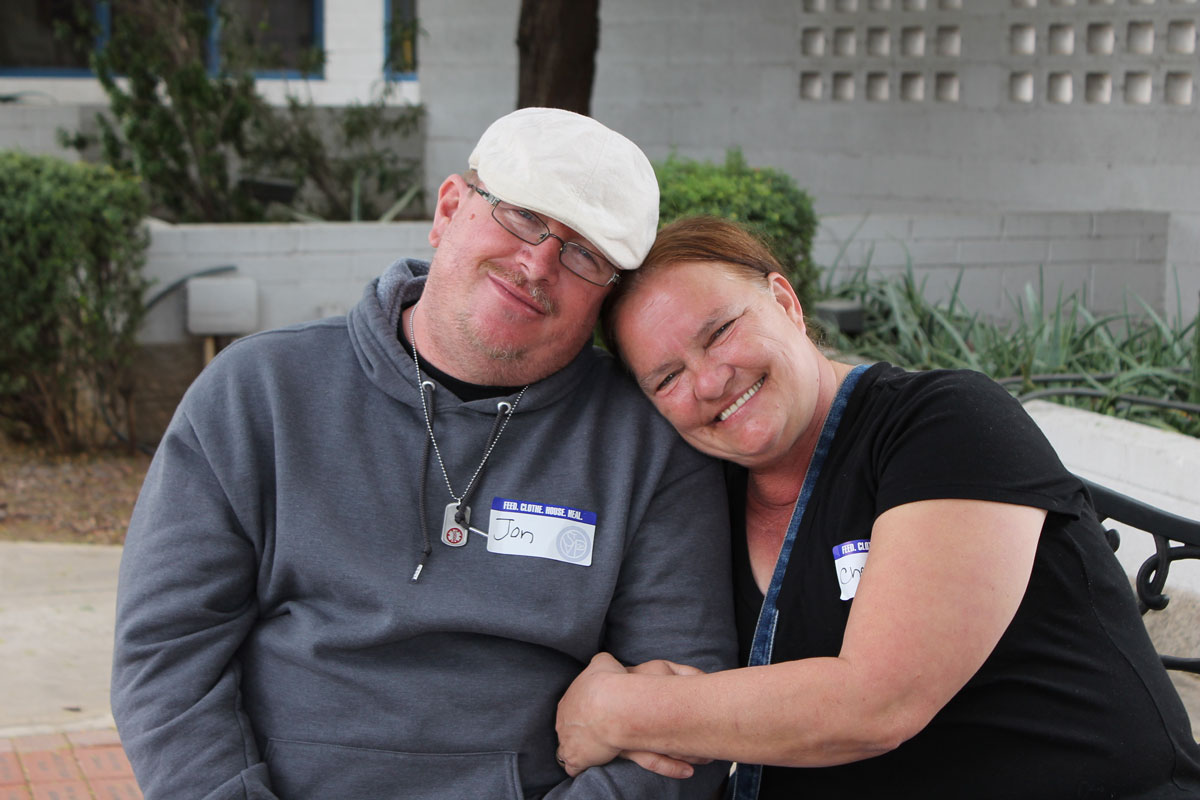 In the middle of separate crises, Jonathan Barker and Cheryl Pawloski thought of only one thing—they each needed a place to live. Love, well, that could wait.

Jonathan had worked as a security guard for more than seven years in Phoenix until a sudden stroke partially paralyzed his right side, putting him out of work. Without a paycheck and trudging through the process to apply for Social Security disability insurance, he faced a gap in income and a landlord who could no longer put off collecting rent. His parents had died long ago, so he had no family support system, only a church that connected him to St. Vincent de Paul.

Cheryl had been living with family in Goodyear, Ariz., until they forced her out. Her modest Social Security check couldn’t cover moving costs on top of base rent, and affordable housing waitlists were too long. She needed housing now. Her therapist’s friend gave her three phone numbers—St. Vincent de Paul’s Ozanam Manor was the first she called.

Ozanam Manor, or “Oz” as it’s lovingly called, is SVdP’s dormitory-style shelter for men and women age 50 and above experiencing homelessness and also accommodates physically or mentally disabled adults age 18 and above. The transitional shelter bridges people to more permanent housing. It has 60 beds with 23 set aside for homeless veterans.

“We were instant friends,” she said. “When I first met him, he was very quiet, very shy. I had to get him out of his shell.”

During their conversation, Jonathan revealed he had no immediate family left and a doctor’s appointment the next day. Cheryl offered to go with him.

“He didn’t believe me that I would go,” she recalled, “but from that day on I went with him to everything.”

Jonathan had grown used to doing everything on his own and had given up on relationships in his late 20s. But Cheryl surprised him.

“I was determined to help him because I could see that he was very shy,” she said. “I’ve always been somebody that’s helped other people.”

Cheryl saw Jonathan through all of his health trials, from getting a pacemaker to recovering from his stroke and coping with short-term memory loss.

“I would do anything to make him feel better,” she said. “I never wanted him to hurt.”

Cheryl cooked for Jonathan every night so that he stayed on his doctor’s recommended low-salt diet. She even helped support him as he walked. Soon enough a quiet, unspoken affection developed.

“To me, it was all new,” Jonathan said. “I had problems trusting people, and I didn’t want my heart to be broken. I hadn’t been in a relationship in a long time.”

But that didn’t discourage Cheryl.

“I had all the patience in the world for him,” she said.

The day they put Jonathan on Cheryl’s phone plan, they cemented their relationship. While grabbing a sandwich at Subway, Jonathan burst out, “So we’re on our first date.”

He hadn’t asked her, but they both just knew.

Back at Oz, they stayed respectful of the rules. No holding hands. No kissing. So life pushed forward and Oz propelled them each toward stability.

Case Manager Kim Coleman helped expedite the Social Security process for Jonathan, securing him his monthly check. And Cheryl had the time and breathing room to apartment hunt while saving money to move.

Every day that summer they toughed through the heat, riding buses and walking all over the Valley looking for apartments. In the evening, they’d come home to Oz and cook dinner. They grew used to their routine and the community they had around them.

But when it came time to leave, Cheryl wasn’t leaving without Jonathan, who had made great strides in his recovery and could feel again in his face and fingers.

“The thing of it is, I’d be a total basket case right now if it hadn’t been for her and the staff,” Jonathan said. “It would’ve made it harder for me to go through things. I’m just in constant shock and awe of her.”

On Aug. 28, 2018, they both moved out of Oz and into the Metrocenter area. They each wear promise rings that Jonathan bought for them.

“I didn’t buy these for the fun of it,” he said. “I just never thought I was going to fall in love with somebody.”