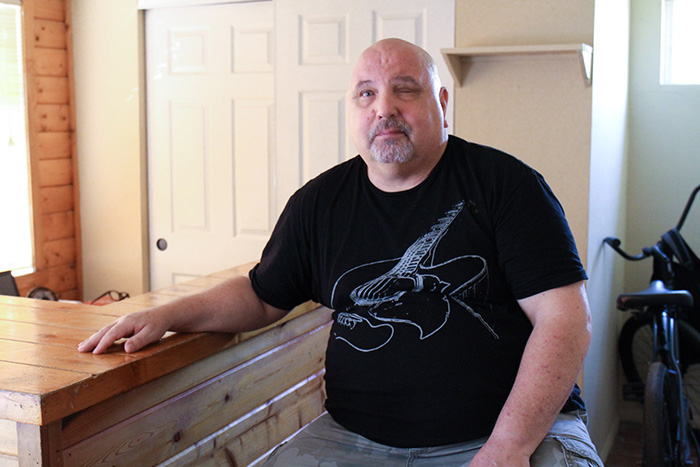 “You never think something like this will happen to you. I never thought in a million years that I would go homeless. I’m lucky I lived through it.”

Five years ago, Richard stepped onstage and shared his story with a room full of strangers. As a recent Ozanam Manor resident, he agreed to participate in St. Vincent de Paul’s annual fundraising breakfast to talk about his time at the temporary shelter, after becoming blind and nearly homeless. Richard was incredibly grateful for the services he received.

Five years later, this sentiment has only grown stronger.

“I can barely remember that morning when I stood up and shared my story,” he said. “I was still too close to everything. And the speech I gave just barely touched on everything that happened.”

His story goes back to 2008, when a devastating recession hit America. Many lost their jobs, savings, and for the most unfortunate, their homes. During this time, Richard was a construction worker and his industry was one of the hardest hit. So he decided to go back to school. He earned an associate’s degree in graphic design and began searching for job.

One morning he woke up and knew something was wrong. He opened his eyes and everything was cloudy, as if a fog had rolled in. He could only see two or three feet in front of him and everything was blurry. He ran outside in a panic and was terrified that he couldn’t see down the street. Someone walked by and it looked like a shadow.

At the time, Richard was living in a small trailer by himself. He didn’t have family in Arizona or any close friends. Worst of all, he couldn’t even see the telephone to call for help.

Without medical insurance, he didn’t know what to do or where to go. He lived off of his savings for the first few months, but then it got worse. He lost complete vision in one eye and the other was growing darker each day. He couldn’t take the bus without getting lost and he had to be very careful about where he went, so he could find his way back home.

“I didn’t want to go to the VA because of the problems that were happening there at the time. The only money I received was a small VA disability check. It wasn’t much, but it was enough to keep me alive,” he said.

His landlord, who was aware of Richard’s situation, began taking collateral, such as Richard’s quad and motorcycle, in lieu of rent payment.

But that only covered rent. He quickly ran out of money to pay bills, and his utilities, including water, were shut off.

“I was dead in the water. It was pitch black in my trailer and it was cold. With the little money I had, I used to go across the street and buy two tacos for a dollar at Filibertos. Or I’d walk to Food City and buy bread and peanut butter. That’s all I would eat most days. I lost a lot of weight, but somehow I survived.”

Months passed and Richard’s situation stayed the same. Unfortunately, the weather did not. High summer temperatures began to approach and his trailer became a stifling overheated ‘oven.’

Without water, Richard showered using a hose and rinsed his clothes in a bucket. He would go to water machines and buy a gallon for a quarter. He thought his teeth were going to fall out. He was hot, dirty, miserable and hopeless.

“Every time I left my place to get food, I didn’t know if I would come back to a lock on my door.”

His landlord had threatened to evict him, but Richard stayed put, knowing he couldn’t go out into the streets. He knew that losing the roof over his head would be the end of him.

But finally one day, Richard bumped into his neighbor who told him about Adult Protective Services. He gave Richard a phone number on a piece of paper. Unable to read it or use the phone, he handed the number over to his landlord. His landlord looked at the paper and didn’t say anything.

A week later he heard a loud knocking on the door and he was afraid he was finally getting evicted. A man in a white shirt named Alfredo stood at his doorstep. He was from Adult Protective Services.

From that moment, Richard said his life had been saved. 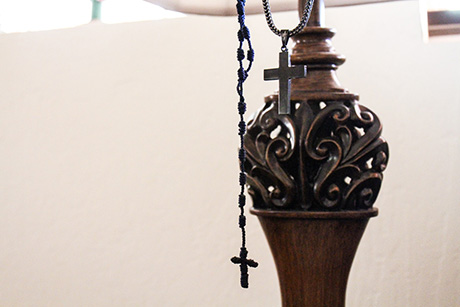 Alfredo took one look at his conditions and acted immediately. He took Richard to the VA hospital, where doctors rushed to start working on his eyesight. They did a minor in-office surgery to stop his blindness from worsening. One eye had already been lost completely.

After the operation, Alfredo wouldn’t let him return to his trailer in those conditions.

“Alfredo told me, ‘I found this place called Ozanam Manor.’ Neither of use knew how to pronounce it, but we knew it was a miracle that I got in. Someone had just moved out the day before, leaving one bed open. I was incredibly lucky to be there,” he said.

He was finally able to take a shower and do his laundry. Over the next several months, Richard started meeting regularly with SVdP staff member Maribeth, who helped him fill out disability paperwork, apply for food stamps and made sure he could make it to all of his medical appointments.

Right before Christmas in 2010, he finally had major surgery on his eye and for the first time since that fateful morning more than a year before, he got his sight back.

“Man, was I happy. I peeled off my bandage and I could actually see again. You don’t know what that’s like. I felt like one of those men in the Bible that had been healed.”

After Richard’s disability payments began coming in, he could finally move out of Ozanam Manor into an apartment. A year ago, he applied for a VA home loan, and to his surprise, was able to purchase his own home in north Phoenix.

“I never thought I could live in a place like this after what I went through. If it wasn’t for Alfredo and St. Vincent de Paul, living in this house would not be possible.”

Since leaving Oz Manor, Richard started collecting guitars. Still legally blind, he now spends his days at home immersed in music – listening to it and learning how to play. On Sundays, he takes the bus to go to St. Mary’s church. 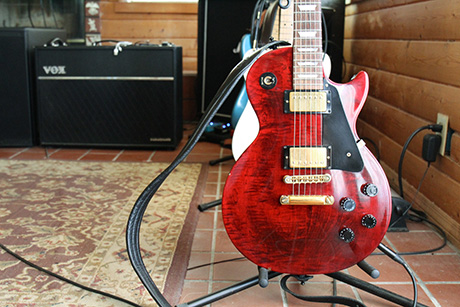 “I thank God every day for how he intervened in my situation. I still haven’t fully gotten over what happened to me. It felt like being dropped off in the middle of the ocean. You have nowhere to go and you don’t know what’s going to happen. You wonder, am I going to die or am I going to live? My faith has become so much stronger through this experience. It’s been five years now, and my life has rebounded tremendously, thanks be to God.”

With your support, Richard is one of many seniors that we’re able to serve through programs like Ozanam Manor and our food and rent assistance. Donate online to ease the suffering of struggling seniors today.