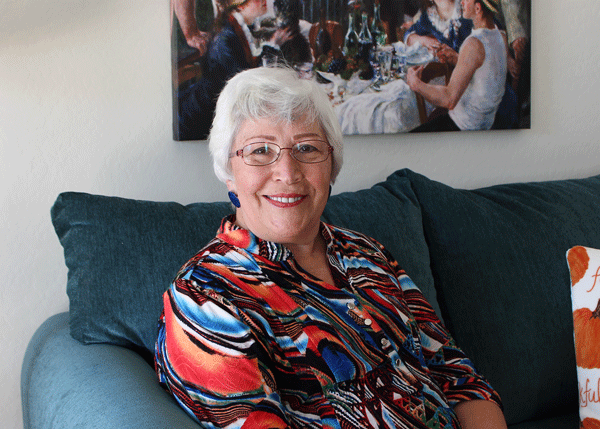 St. Vincent de Paul has a way of impressing itself on the hearts and minds of first-time visitors. For some, it’s the overwhelming culture of kindness. For others, it’s the demonstration of faith in action. And still others focus on the breadth of services.

For Susan Herrmann, it was how SVdP makes use of everything, letting no resource go to waste. Susan took her first tour of SVdP’s campus in 1989, shortly after she moved to Phoenix from Wisconsin. She didn’t know it then, but that tour would spark a deep connection and more than 27 years of supporting the mission.

“I became immediately attached,” Susan says. “I was so impressed.”

From how grocery store excess gets to families who need food to collapsing boxes for repurposing, Susan saw resourcefulness at work all around. That’s something she especially appreciated given her profession as a financial advisor.

Susan had a 40-year career in the field and owned her own financial planning business until she retired at the end of 2019. Throughout that time, Susan came to see that the very resourcefulness she witnessed her first day at SVdP translated to the nonprofit’s handling of finances as well.

“It’s important to me to answer, ‘What does a dollar buy at SVdP?’” Susan says. “I know that my dollar there goes very far in helping because of how good they are at stretching their donations.”

“I know that my dollar there goes very far in helping because of how good they are at stretching their donations.”

Susan sees the impact of her dollar in so many ways. She sees it in the new space for Ozanam Manor, SVdP’s transitional shelter for seniors, veterans and adults with disabilities. She sees it in the expanded medical and dental clinic for uninsured patients. And she watches it grow the SVdP Urban Farms program.

None of those SVdP programs existed when Susan took that tour more than 30 years ago. And they wouldn’t exist today without every donor like Susan who invests in promising solutions with hope. Susan herself stresses the investment idea behind her financial gifts, which she asks to support general operations and remain flexible to address pressing needs at any moment. During the pandemic, some of that funding went to family bill assistance.

“I’ve stayed with St. Vincent de Paul for so many years, because it’s not just a handout,” says Susan, who focuses all her charitable giving on SVdP. “Being a financial advisor, it was important to me that it wasn’t just rent money this month for a family, but that there were solutions so that next month families wouldn’t be in the same situation. St. Vincent de Paul makes sure of that.”

“Being a financial advisor, it was important to me that it wasn’t just rent money this month for a family, but that there were solutions so that next month families wouldn’t be in the same situation. St. Vincent de Paul makes sure of that.”

In recent years, Susan began pledging a generous gift annually to SVdP. She believes faithfully that giving and giving generously multiplies. But her giving also comes from understanding personally the power a stranger’s compassion and financial means can have in another person’s life.

“I went to college on scholarships,” Susan shares, “so I know personally what a difference one person can make in someone else’s life.”

With her undergraduate and graduate degrees, Susan went on to a highly successful career. She looks back with gratitude knowing that without someone else having once invested in her life and education, she might not be where she is today.

Now Susan lives in Prescott Valley, Arizona, a little more than an hour north of Phoenix. Since her first tour of SVdP, she’s visited a handful of times in person to mark the milestones over the years — building grand openings and new program launches. The distance and a busy retirement keep her from making many trips to visit SVdP’s main campus for volunteering or smaller events. But Susan’s at peace supporting from afar.

“We all have different roles,” she says. “Mine is a financial role. It’s something I can offer that others can’t always. “Some of us have hands to serve. Some of us have wisdom to lead. And some of us have enough means that we can share with others. I know my role and how I can have the most impact.”

What role will you fulfill? Make a gift. Volunteer. Host a drive.